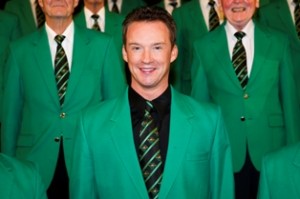 Hartlepool Male Voice Choir had its beginnings in the late 1950s with a group of lads having a sing song after Rugby matches for Hartlepool Old Boys RFC.

Their efforts were heard by a professional musician, violinist Reg Guy, who as MD of West Hartlepool Operatic and Dramatic Society (the WHODS), was already acquainted with one of the group, namely Ralph Kidson.

“Fetch me sixteen lads and I’ll teach you how to sing properly as a Choir” was Reg’s challenge.

Unfazed the bold Ralph turned up with 26 names and asked when they could start. Reg took up the gauntlet and very soon the self-styled Hartlepool Glee Club had developed into a keen ensemble with up to 30 voices paying their shilling a week to be taught as a Choir. Rehearsals were somewhat intermittent but after a while the group became well established.

When the Old Boys moved from Friar Terrace to Easington Road the accommodation, so graciously given at Friar Terrace, was no longer available but St. John Ambulance Brigade generously offered the use of their premises in Sandringham Road, where the club rehearsed every Friday evening. The Glee Club principally did concerts for the elderly, disabled, church restoration or building funds, etc., or any cause they considered worthwhile. The founder members recognised Reg Guy’s contribution and after Reg had retired from professional work changed the name from The Hartlepool Old Boys Glee Club to The Reg Guy Singers. The membership has since increased to the present level. The numbers varied at the time but a hardcore of sixteen was the basis of the choir. Founder members still with us include Stan Lindridge and George Watling. 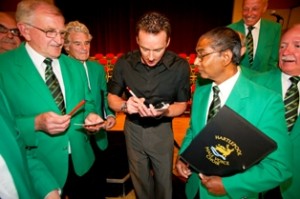 After the death of Reg Guy the baton was wielded for a short while by enthusiastic amateurs until eventually David Gibson took on the role of Musical Director, a post he has held for more than 35 years.

The Choir is now in Group 4 of the NAC lists meaning that the singing strength has exceeded 80, although recently numbers have dropped slightly below that figure. Under David’s leadership and with a proactive Committee, the Choir has gone from strength to strength and is now one of the foremost Choirs in the North East of England. It has performed in prestigious venues such as  the Royal Albert Hall, the Sheffield Arena, The Sage, Gateshead, and both Ripon and Durham Cathedrals.

The name was changed from The Reg Guy Singers to Hartlepool Male Voice Choir in 1998, better to reflect the size of the group and as a more clear indication of its activities.

In the Golden Jubilee year of 2008 the Choir introduced its Summer Celebrity Concert to complement the already well-established Christmas Concert. Aled Jones was the guest star and the concert was such a success that it has now become an annual event and brought both Lesley Garret and Russell Watson to the town, each on two occasions as the star guest.